Image by TheBrassGlass on Morguefile.com

When Yankee Doodle went to London riding on his pony, he stuck a feather in his cap and called it – macaroni! As a kid I always pictured Yankee Doodle as an Ichabod Crane type. A tall, skinny guy, his feet dragging on the ground, riding a tiny, exhausted horse with a weary look on its face. In my childhood imagination I saw him wearing a tricorn hat with a giant elbow macaroni sticking out of the top of it like a feather. This image stuck with me for years.

Image by MaxStraeten on Morguefile.com

I found out later that macaroni was a term related to foppishness and referred to the tiny tricorn hats on top of the Macaroni wig that the men of the Macaroni Club in Britain wore in the 1700’s. Yankee Doodle was a song of derision aimed at Colonial troops by members of the British Army. The British thought that the Colonials were so unsophisticated that if they put a feather in their caps they would think they were wearing the highest fashion of the day. Later, the Colonials would use the song to mock the British troops when they won.

When I stumbled on the term macaronic, I thought it might have something to do with this. Perhaps it meant anything thought to be sophisticated by a group that actually isn’t sophisticated. (Like velvet paintings at truck stops?) When I did a little more digging I made an interesting discovery. 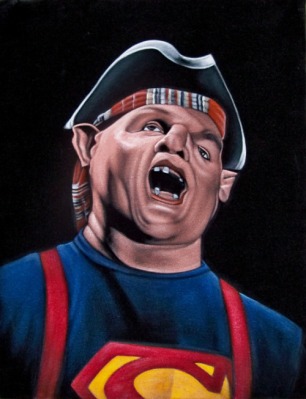 “Sloth” a painting on velvet by Bruce White

Macaronic refers to a way of mixing two or more languages in a piece of writing for satire or humor. It has derogatory overtones, like the macaroni in Yankee Doodle, so people debate whether it should be used to refer to mixed language in more serious or dramatic literature.

According to Wikipedia, the term comes from the New Latin word macaronicus which in turn was derived from maccarone, a type of dumpling eaten by Italian peasants. It began with a mixing of Latin and vernacular and came about because educated people who knew Latin needed a way of communicating with people who did not speak or read Latin. The term may have come from a comic poem written by Tifi Odasi in the late 1400’s called the Macaronea.

The device of macaronic language is often used in comic films and plays to poke fun at people who fancy themselves to be more sophisticated than they actually are. A good example is Adenoid Hynkel, Dictator of Tomania, Charlie Chaplin’s character in The Great Dictator who speaks in German – English macaronic language and says things like “cheese und cracken” and other similar phrases.